Despite not winning Amazon’s new headquarters or the 50,000 new jobs projected to come with it, it seems many HQ2 rejects will still see quite the Amazon effect — at least when it comes to housing.

According to the Home Price Expectation Survey from Zillow, experts predict serious home price gains in many of Amazon’s finalist cities next year. The survey asked 100 real estate economists and investment experts to name three markets likely to outperform the national average next year, a projected 3.8% uptick in home prices.

Denver, Washington, D.C., Atlanta and Dallas came in as the top-mentioned predictions. All four metros were among the e-commerce’s retailer’s final contenders (with D.C. actually snagging the win, along with Long Island City, Queens).

Nashville and Boston also made the top 10 list of markets mentioned, both of which were HQ2 finalists as well. Boston lagged behind national home price growth for most of this year. 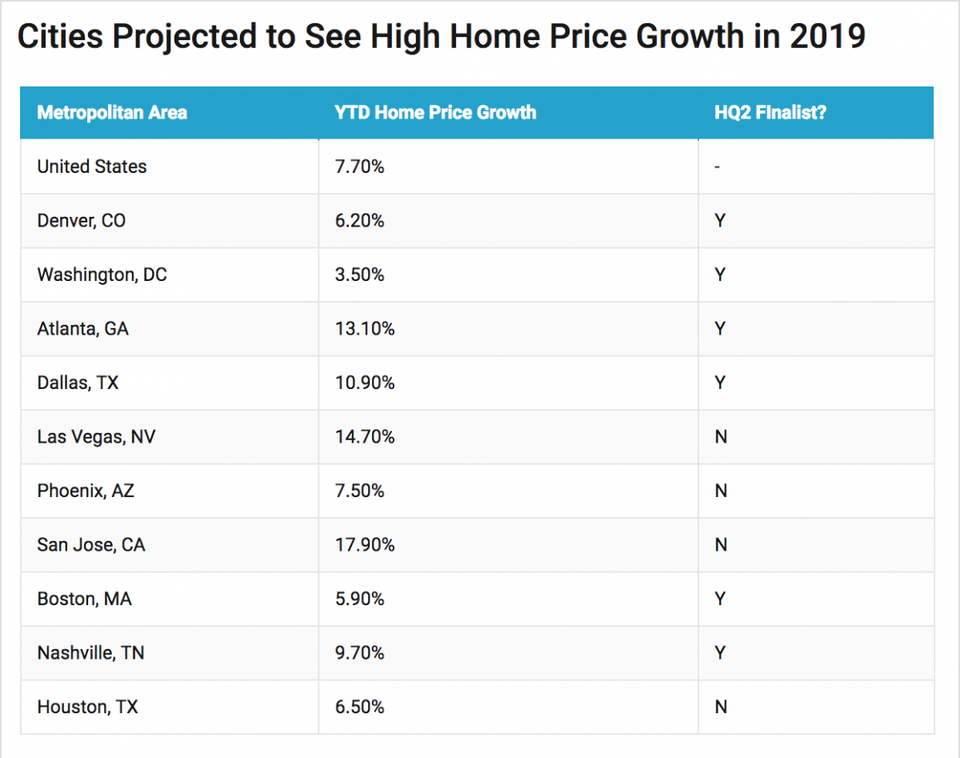 This chart shows the 10 markets that experts predict to see higher-than-average home price growth in 2019.DATA COURTESY OF ZILLOW

According to Aaron Terrazas, senior economist at Zillow, much of this projected growth is “spillover” from the cities’ HQ2 proposals — not to mention any related infrastructure and taxation changes — which could draw in large corporations and tech companies as they’re priced out of higher-cost markets like Seattle, New York City and San Francisco.

“Amazon ultimately selected two of the country’s most prominent hubs of commerce for their second and third headquarters, but many of the candidate cities that were not ultimately selected could see spillover gains in 2019,” Terrazas said. “The groundwork that they undertook to entice Amazon will also be attractive for smaller employers increasingly strained by high and rising costs in traditional tech hubs. As mortgage rates rise, communities that can offer affordable workforce housing and reasonable commutes are likely to be long-term winners and should expect their housing markets to outperform the nation.”

Chicago is one of the few HQ2 contender outliers when it comes to 2019 projections. Experts expect home price growth in the Windy City to underperform compared to the national average next year — meaning a less-than-3.8% jump in prices. Home values are currently 13% below their pre-recession peaks, according to Zillow.

San Diego and Los Angeles, which have both seen significant home price growth in recent years, were also predicted to see slower-than-average upticks next year.