It’s a lucky day for Muni, as the first of their own fleet of the future finally rolls into town.

The transit agency plans to add hundreds of the new light rail vehicles to its fleet by 2028, and to begin cycling out the fleet of Italian-made Breda trains that they’ve been stuck with since 1996.

These new trains, manufactured in Sacramento, will reportedly be faster, quieter, more efficient, and less prone to malfunction.

In fact, the manufacturer, Siemens, promises that they can go “10 times longer before requiring significant maintenance” than the present rigs—which perhaps means they’ll still be rolling in 200 years?

You won’t actually be able to hop on one of the new rail coaches with their signature orange cockpits until summer, after the city finishes up a seven month regimen of tests. A December rollout had once been the target, but two weeks over the line is pretty good in Muni terms.

The current Breda trains are infamously temperamental—Muni claims that door and step malfunctions are the number one cause of delays on streetcar lines—and were never really great specimens even when they were new.

A single Breda car weighs 80,000 pounds, 450 of that in the doors alone, which isn’t doing any favor for San Francisco’s already troubled streets. The new trains promise to be lighter—the doors are only 80 pounds, for example. 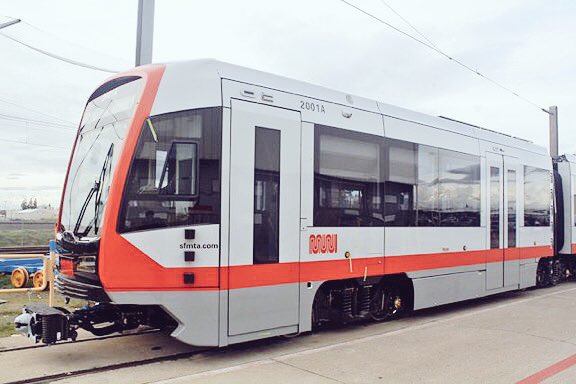 The transit agency and other city bigwigs will show off the inaugural car at noon today. The foremost question on our minds: Will the Siemens trains emit that same ear-piercing screech when something stops the doors?

“I believe it’s a different sound,” SFMTA spokesman Paul Rose told Curbed SF. “They will definitely be quieter,” he added.