And that’s true even if you’re a big business.

With rents spiking, deep-pocketed companies and public agencies are increasingly buying offices, for some of the same reasons home buyers plunk down for a space to live: more certainty over the long term on what they’ll pay for a roof over their heads.

The latest dealmaker: BART, which owns a sprawling network of rail lines but not its Oakland headquarters at 300 Lakeside Drive. Facing a rent increase of more than 60% there, BART’s board of directors approved on Thursday the purchase of a nearby building at 2150 Webster St. for a new headquarters.

It won’t be cheap. BART expects to pay $140 million and an additional $87 million in construction and other costs to move in. But buying will save millions of dollars a year compared with renewing its lease or leasing elsewhere, said Sean Brooks, BART’s real estate director.

BART isn’t alone. Seven major tenants in San Francisco and Oakland have spent or committed to spend more than $2.7 billion on real estate since 2012, according to property records. Tech giants Google, Facebook and Apple have each spent billions of dollars to buy in Silicon Valley. 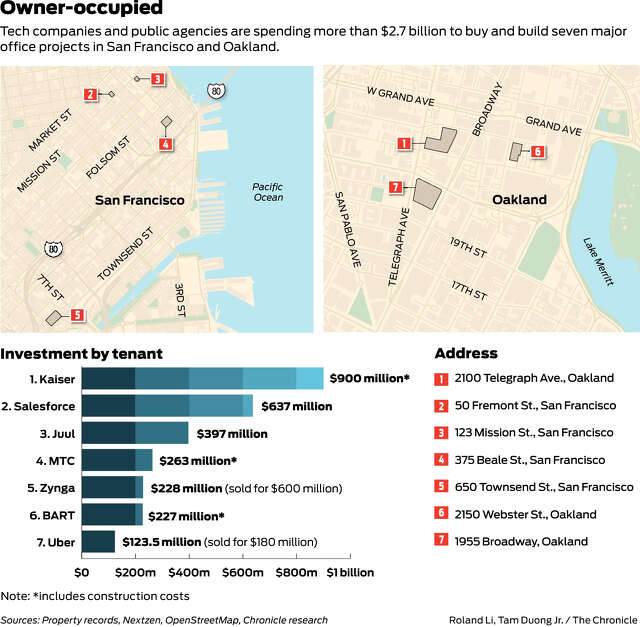 Beyond escaping the unpredictable office market, ownership allows companies to control a building’s branding, design and security, Maloney said. Excess space can also be leased to other tenants for a profit. Government agencies like BART don’t pay property tax on buildings they own.

The biggest hurdle: Buyers must have cash, or the ability to borrow it cheaply.

BART will issue low-interest bonds backed by sales tax revenue, which made the purchase attractive, Brooks said. The bonds won’t lead to any tax increases and don’t require voter approval.

Tobacco giant Altria invested $12.8 billion in Juul last year, and the controversial vaping company bought 123 Mission St. for $397 million in June as it keeps hiring. Seller Northwood Investors made a significant profit after paying $290 million for the tower in 2018.

As with the residential market, timing matters. Companies that spent money on offices earlier this decade are now cashing out. Zynga’s South of Market headquarters more than doubled in value from 2012 to 2019, and the gaming company agreed to sell it this summer for $600 million. In 2017, Uber sold Uptown Station in Oakland for tens of millions of dollars in profit.